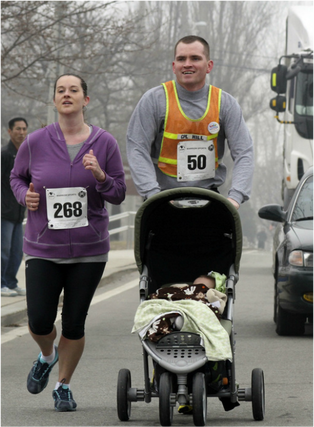 By Sgt. 1st Class Jeff Troth, via Flickr.
﻿One basic way a man can be a good father is to take his health and fitness seriously.  Dads blessed with good genes or those raised in families that prioritize being healthy and fit may find this easier to accomplish than dads challenged by disabilities, chronic illnesses, or negative role models for healthy living during their youth.  Similarly, those with more discretionary money and time are better positioned to live a healthy lifestyle.  Yet, some dads, despite facing significant obstacles, manage to find a way to be health conscious—for themselves and their children.

In my interviews with dads, I find that some are eager to pay more attention to their health, diet, exercise, and risk-taking habits once they learn that they are going to become a father for the first time.  Some give up smoking, drugs, or alcohol.  Some begin to exercise more regularly, alter poor eating practices, and are more careful in monitoring their behavior and medical care as it relates to chronic health conditions like diabetes or hypertension.  Others decide to sell their motorcycles, drive more slowly and buckle up, and say goodbye to other risky behaviors.  When new fathers make these lifestyle adjustments they typically do so because they believe they need to improve their own health, fitness, and safety as they prepare to take on important responsibilities as dads.  Over time, however, such decisions can also indirectly influence the children who observe and learn from their fathers’ actions. 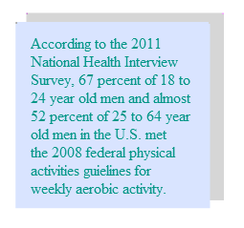 Thus, as children age and become more aware of their surroundings, fathers will have the option of leading by example.  Sometimes that leadership in healthy living can take a form that directly includes the children.  Together, dads and kids can purchase and cook healthy foods, exercise, and make wise decisions about minimizing risky behaviors (e.g., the use of sun screen, helmets, and seat belts).  I’ve noted elsewhere several website links that highlight how dads and kids can jointly benefit from developing healthy eating and exercise habits.

But dads can also lead by example even if their children are not directly involved in specific activities. The child who sees his dad leave the house to exercise or put on a helmet to ride his bike can be affected in a positive way.  So too, the father who purchases and serves healthy foods can leave an impression on his child even if the child doesn’t participate in the shopping or food preparation.  The child who learns that his father goes to an annual doctor’s exam may recognize at an early age the value of monitoring one’s health.